There are several definitions of diabetes, but the most commonly agreed upon definition is that diabetes is a condition when a person’s ability to metabolize carbohydrates (sugar) is impaired. This results in high blood sugar levels. A person with a sugar level of above 150 ml/dl in the blood in the morning is diagnosed as diabetic. Insulin allows the body to convert sugar in the blood into energy. It is secreted by ß (beta) cells in the pancreas. So, in a diabetic, either no insulin or inadequate levels of insulin is being produced. Also, in a diabetic, it is highly likely that even though insulin is produced, it is not properly consumed.

There are two major types of diabetes, Type I and Type II.

Type I, known as insulin-dependent diabetes mellitus (IDDM), is considered an autoimmune disease because the pancreatic cells that produce insulin, the ß-cells, are destroyed by the body’s own immune system. The pancreas then produces little or no insulin. To live, the person with IDDM needs daily injections of insulin. At present, scientists do not know exactly what causes the body’s immune system to attack the ß-cells, but they believe that both genetic factors and viruses may be involved (see reference 2). IDDM accounts for approximately 10 % of diagnosed diabetes in the United States.

IDDM usually develops in children or young adults, although the disorder can appear at any age. Symptoms of IDDM usually develop over a short period, although ß-cell destruction can begin months, or even years, earlier. Symptoms include increased thirst and urination, constant hunger, weight loss, blurred vision, and great tiredness. If not diagnosed and treated with insulin, the person can lapse into a life-threatening coma.

Type II diabetes, also known as non-insulin-dependent diabetes mellitus (NIDDM), is much more common than Type I diabetes, affecting 80-90% of all persons with diabetes. (Thus, we use ‘diabetes’ and ‘NIDDM’ interchangeably unless there is a need to differentiate them clearly.) Initially, NIDDM is often of gradual onset in middle age. However, later stages of this disease are very severe, resulting in various long-term complications, such as kidney disease, heart disease, eye disease, nerve disease and others. These complications make diabetes a leading cause of death.

Obesity is an important factor in NIDDM. Also, NIDDM develops more often in genetically predisposed individuals. The pathological changes in the pancreatic islets of patients with NIDDM are not always apparent. Many patients with NIDDM have normal to high plasma insulin levels. In these individuals, diabetes arises not from a shortage of insulin, but may arise from defects in the molecular machinery that mediates the action of insulin on its target cells. In other words, NIDDM is not caused by ß-cell destruction but by other mechanisms, such as insulin resistance (see reference 3), related to downregulation of insulin receptors, defects in insulin secretion from the pancreatic ß-cells and other changes to the glucose transporter system.

Every cell needs glucose for fuel. Any impairment to metabolizing glucose and thus delivering it to cells leads to the damage of these cells and organs. As a result, tissues and organs like the kidneys retina, those with the highest demand for proper blood flow, are the most vulnerable to destruction by high blood sugar. The lack of blood flow and oxygen to the tissues can also result in many infections so grave that often amputation is the only way to treat them.

High blood sugar also causes increased fatigue and weight gain. These are not instantly lethal, but cause long-term and permanent damage over many years that are then followed by lethal complications. This is why we often take a lax attitude to high blood sugar: the harm is slow and gradual—but certain and fatal. 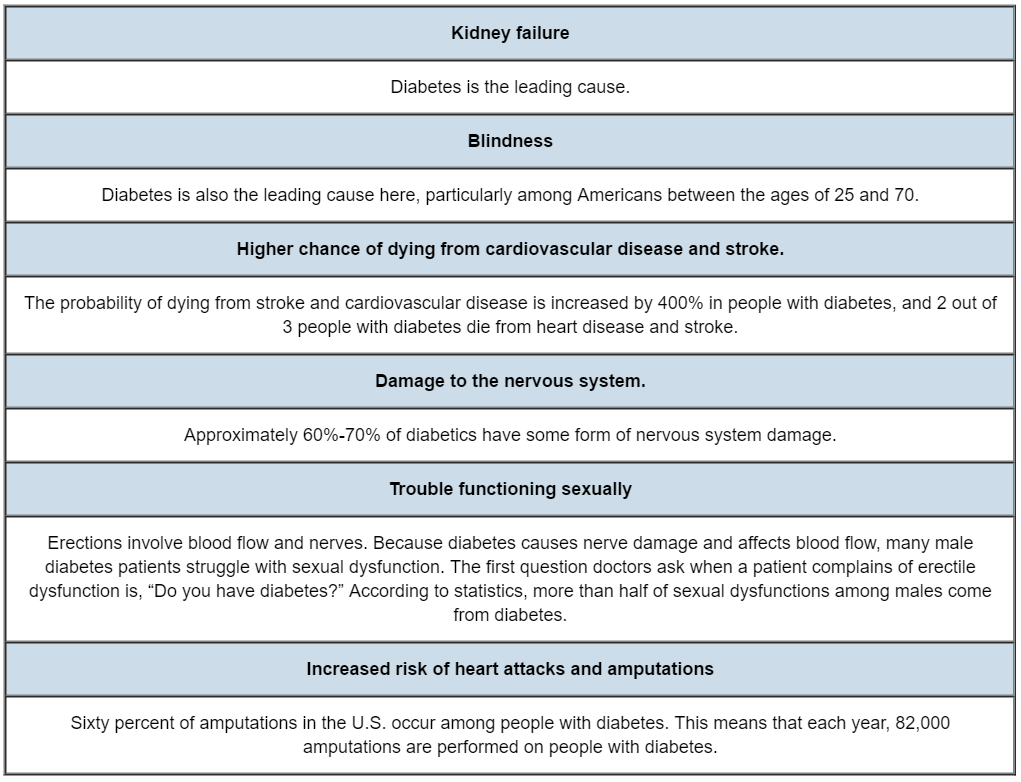 Diabetes is a genetic disease?

Diabetes itself is not a genetic disease. However, if one (or both) of your parents is diabetic, there is a higher chance of becoming diabetic compared to those of healthy parents. Basically, your chance of becoming diabetic would be 57.6% when both of your parents are diabetic, and would be 27.3% when only one of them is diabetic. In medical perspectives, it can be said that there is genetic predisposition to diabetes. Thus, there are good reasons for you to be more cautious if any (or both) of your parents is/are (a) diabetic patient(s).